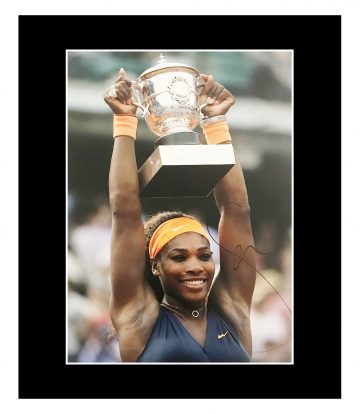 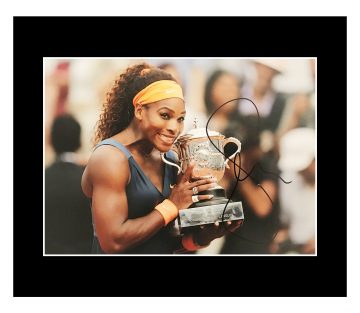 This super-stellar tennis star needs no introduction – a name synonymous with astounding success. Serena Williams is a tennis legend and huge inspiration for women everywhere – the embodiment of female empowerment and outstanding achievement.

Born in Michigan, Serena started playing tennis aged three after the family moved to Compton in California. Along with her sister Venus she was coached by her mother and father until the age of nine, when the family moved again so she could attend Rick Macci’s tennis academy. As a junior tennis player Williams showed promising ability, her achievements offering small glimpses of what was to come during her adult career. At the age of ten she was ranked number one in under-10s tennis in California.

At the tender age of 14 she made her official debut, using a wild-card entry to get around age eligibility restrictions. Serena moved through the ranks, slowly gaining more experience and credibility, as she began to disrupt the status quo. By early 1999 she was on the verge of becoming a top 10 player – achieving rank 4 by the end of the season.

Serena’s road to success hasn’t been smooth – injuries and periods of poor play have resulted in a career marked with huge highs and significant lows. Yet it’s her stamina and determination in the face of adversity that has set her aside from other professional tennis players – coming back time and again to defeat, divide and conquer.

In total she has 23 Grand Slam singles titles to her name – including 7 Australian Open wins, 7 Wimbledon triumphs and 6 US Open trophies. She has remained number 1 seed for the majority of her professional career, and is 1st in the all-time female tennis rankings.

You can savour a slice of history when you purchase from our fantastic collection of signed Serena Williams rackets, balls, shirts, tops, caps and other memorabilia. You’ll find a variety of items autographed by the star, to collect and covet or proudly place on display. Each product is supplied with a certificate of authenticity so you can be sure of its provenance.