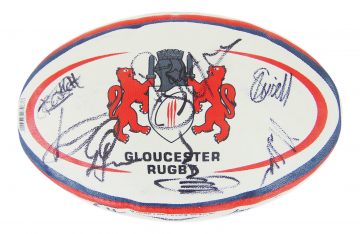 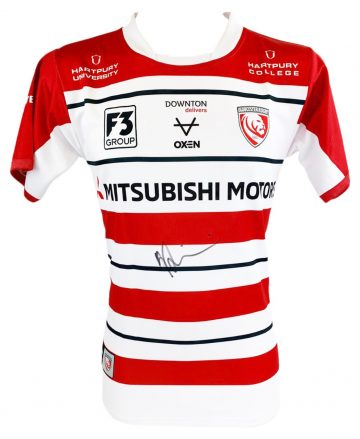 Gloucester is a powerhouse in the world of rugby. The Cherry and Whites (as they are known to fans) play both in the top tier of English rugby and on the European stage. Discover a fantastic collection of signed Gloucester rugby memorabilia from Firma Stella.

Gloucester Rugby Club was initially formed in 1873, sharing a ground at the Spa. After an argument, they left and moved to a site on the Castle Grim Estate in 1891 now known as Kingsholm, where they have remained ever since.

Gloucester have always been a successful side showing advanced styles of play and trophy-hungry determination. They dominated on domestic and international soil until the dawn of professionalism in 1997. To date the club has won 11 major trophies – including the Zurich Championship and two European Challenge Cups. One great honour in particular was the club’s victory at the inaugural RFU Club Cup in 1972 – the very first national competition in English Rugby Union. They went on to win the cup a further three times – plus another triumph at its successor the Anglo Welsh Cup in 2010-2011. Although Gloucester competed in two Premiership finals in 2003 and 2007 they lost in both after topping the end of season table.

The club’s unofficial nickname, the ‘Cherry and Whites’, refers to their iconic strip colours. The nickname can be traced back to the early 1950s, but it has never been adopted officially by the club itself. Despite this it’s often used across marketing campaigns, programmes and social media, and is well loved by fans.

Choose from an excellent array of Gloucester signed memorabilia here at Firma Stella. We’ve sourced a variety of extra-special items signed by some of Gloucester’s brightest stars – past and present. Shop rugby balls, shirts, boots, photographs and more – all verified and 100% genuine.