Shop our signed Rangers FC football memorabilia including signed Glasgow Rangers shirts, boots, football gloves and autographed displays. All of our autographs come with fast worldwide shipping, free UK delivery and a Certificate of Authenticity. Many come with a photo of the actual signing! 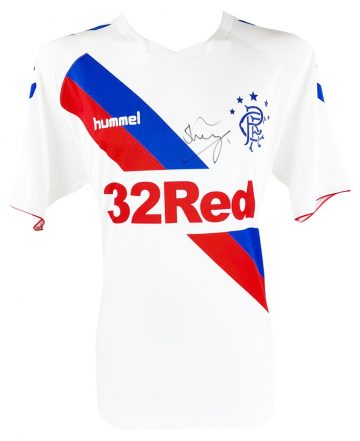 Scottish Premiership giants Glasgow Rangers (commonly referred to as Rangers FC) have been firmly in the game since 1872. Rangers are famed for their thirst for success and title-hungry attitude, a legendary Scottish club and source of great pride for many Glaswegians.

Rangers was one of the very first eleven clubs to join the Scottish Professional Football League – finding true success in 1920 under the leadership of legendary manager Bill Struth. He led the club to a triumphant 14 league titles before the start of Second World War. Sustained success was a trademark for Rangers FC until 2012, when the club was declared insolvent after a period of administration and failed creditor agreements. At the time many felt that such financial disaster could completely derail Rangers – but within just four years they were promoted three times and gained their rightful place in the Scottish Premier League, returning to the top flight in 2016.

Despite the ups and downs, glory and success for the club has been abundant over its 146 active years. Glasgow Rangers have won more league titles than any other club in the world – one of football’s most prestigious accolades. They have won the league title 54 times, the Scottish League Cup 27 times and the Scottish Cup 33 times. Rangers achieved a record-breaking treble of all three titles in the same season a whopping 7 times. They also won the European Cup in 1972.

Rangers have a famous and long-running rivalry with fellow Glasweigan club Celtic. The two are collectively known as the ‘Old Firm’, and derby matches attract thousands of fans from all over the world.

Here at Firma Stella you’ll find a fantastic collection of signed Glasgow Rangers football memorabilia. Each item has been carefully hand-picked and verified for authenticity – many are supplied directly from the source. Browse to find signed Rangers FC shirts, footballs, boots and mounted photographs celebrating some of the club’s most memorable moments.