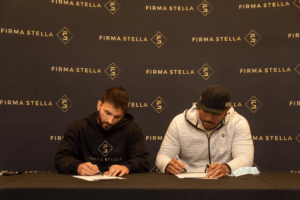 We are proud to announce Firma Stella are now an exclusive official memorabilia partner with rugby legend Manu Tuilagi. Sale Sharks and England Rugby superstar Tuilagi is a world-renowned professional rugby player who plays at the top level of the sport. We held a signing session with the colossal of a man in October 2020 in the affluent suburb of Knutsford, Cheshire.

Manu signed hundreds of personalised items, many of which are now available on our website. These include rare one-offs including the England shirt he wore in the Rugby World Cup Final and the rugby boots he wore when he scored a try in the semi-final against the All Blacks!

Peter Johnson, entrepreneur and owner of Firma Stella comments; “We are proud to welcome Manu into the Firma Stella stable of sports stars represented by the company. Fans now have access to a range of rare and exclusive merchandise which they can buy as collectors or as gifts for others, with complete confidence that they are 100% authentic”. 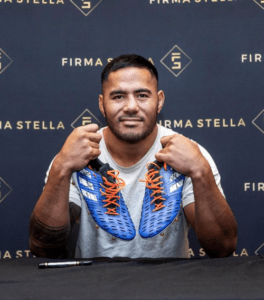 Manu Tuilagi’s full name is Etuale Manusamoa Tuilagi.  He was named Manusamoa after the Samoan national rugby team.  The star was born the same year one his older brother’s played for Samoa at the 1991 Rugby World Cup.  The rugby legend is the youngest of six brothers, all who have represented Samoa at International Rugby. He moved to the UK when he was 12 years old and started playing for Rumney RFC.  His brothers were playing for Cardiff Blues at the time.

Tuilagi would go on to play for Leicester when he was 15, at the Leicester Tigers Academy.  He got promoted to the 1st XI in the 2010-11 season where he played an impressive first season for the Tigers

Manu represented England for the first time at Twickenham in 2011. He scored a superb try against Wales to make the occasion. He had the good fortune to represent both Samoa and England at international rugby.  Tuilagi would go on to be a regular starter for England at the 2011 Rugby World Cup in New Zealand. His solid performances for both the England team and Leicester Tigers earnt him a call up to the British and Irish Lions squad in 2013.  He would go on to tour with The Lions a number of times.

The Rugby star has scored 18 international tries to date for England and continues to be an important player for them. He has scored in a number of big matches at a number of key tournaments. These include the 2011 and 2019 Rugby World Cups.  Manu has the accolade of scoring at five different Six Nation tournaments.

Tuilagi signed for the Sale Sharks in July 2020 and continues to play for North-West side. We have a large collection of signed Tuilagi shirts, balls and photos available.  All Manu Tuilagi signed items come with photo signing proof and a certificate of authenticity.  You can personalise each item with your choice of frame.  Give the gift of a legend, to the legend in your life.